“Our Experience with iCepts has been Exceptional”

The hardware required is industry standard, not proprietary.  So the cost of implementing this open source voip phone system is just hardware (server, phones, switches) and labor costs – no expensive license fees.  For fractions of the cost of a big-name VoIP System, iCepts is offering a fantastic phone system with some of the same (or better) features.  And because these IP Telephony engines are released as Open Source software (providing access to the underlying source code), there is worldwide development and support, while being sponsored by for-profit corporations.  These can be utilized with any number of phone extensions – from only a few up to several hundred.

The Open source VoIP systems that we are proposing still utilize the traditional phone lines from carriers (Verizon, Sprint, AT&T, etc.) that a company already has in place.  When using these telephone circuits, local or long-distance calls aren’t being sent “over the Internet” (except in cases of branch access to the phone system via VPN).  However, there is also the capability to utilize Internet Telephone Service Providers either as a backup to traditional Telco lines, or to replace them, often at a very substantial cost savings*.  Again, these Internet telephone providers are only an option, as traditional lines, such as T1’s or analog (POTS) lines can continue to be used.

We also have the capability to interface this phone system (or another Asterisk based phone system) to the software packages that we support, including Microsoft Dynamics NAV (Navision) and others.  With this Click-to-Call interface, we can allow employees to place calls to customers or vendors (or other contacts w/ phone numbers) directly from the ERP application itself.  For example, a customer service representative could be in an order screen in Microsoft NAV and just click the Click-to-Call button.  His/her desktop phone (or softphone) rings and the phone system automatically dials and connects the customer/vendor call to the phone of the representative. 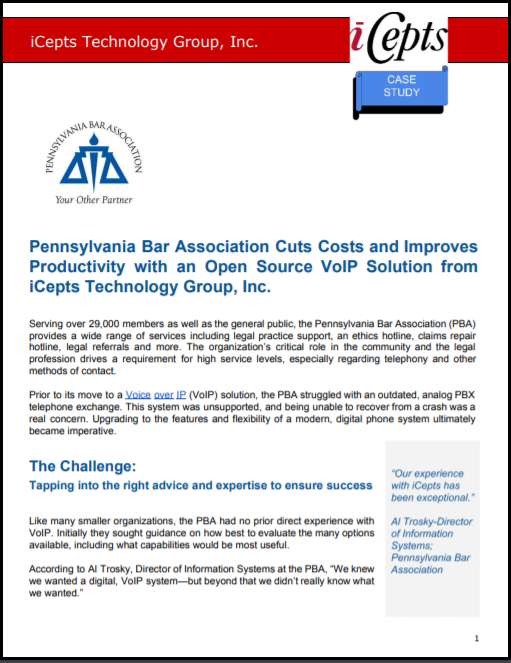 At iCepts, we are an authorized HP dealer for server-grade platforms, an authorized Sangoma partner for telephony cards (the interface to Telco lines), and an authorized Polycom reseller for their desktop phones.  We can put in a pilot/prototype on your hardware using an Internet telephone company that would allow you to try the system without interrupting your existing phone service.  This gives you a low-cost opportunity to check out features without taking down your existing phone system.

*Note: Acceptable voice quality depends on having proper & adequate bandwidth to the Internet.

This is an add-on to the Open Source Asterisk VoIP User Portal, written by iCepts Technology and released to the Open Source Community, which allows the creation and management of Named greetings for voicemail.  Named greeetings are saved greetings recorded by the end-user, who then can use these greetings as one of their system greetings (“The Busy”, “Unavailable”, or “Temporary” greetings) for their voicemail mailbox.  This allows users to change their system greetings from a browser, without having to re-record these greetings:  Click Here for more information, screenshots and instructions to set up your named greetings voicemail.

This website uses cookies to improve your experience while you navigate through the website. Out of these cookies, the cookies that are categorized as necessary are stored on your browser as they are essential for the working of basic functionalities of the website. We also use third-party cookies that help us analyze and understand how you use this website. These cookies will be stored in your browser only with your consent. You also have the option to opt-out of these cookies. But opting out of some of these cookies may have an effect on your browsing experience.
Necessary Always Enabled
Necessary cookies are absolutely essential for the website to function properly. This category only includes cookies that ensures basic functionalities and security features of the website. These cookies do not store any personal information.
Non-necessary
Any cookies that may not be particularly necessary for the website to function and is used specifically to collect user personal data via analytics, ads, other embedded contents are termed as non-necessary cookies. It is mandatory to procure user consent prior to running these cookies on your website.
SAVE & ACCEPT
Go to Top